Say cheese! I have fond memories of food from my childhood but one of my favourites… my mother’s macaroni and cheese. 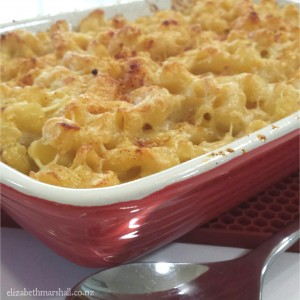 Crunchy on the outside and smooth in the centre, it was worlds apart from the artificial bright orange Kraft macaroni, and fake, cheese out of the box from the USA… Mum made hers from scratch. Actually, she made pretty much everything from scratch something I’m still thankful for everyday.

In New Zealand, it was broccoli or cauliflower with cheese sauce. And I remember in restaurants seafood mornay so rich and fatty you could see pools of oil dabbled across the gooey top that even this cheese lover would struggle to finish!

From my travels around the world, I fell in love with many a cheese and white sauce but learned not every white or cheese sauce is created equal!

There are different methods to creating a smooth and glossy sauce: adding cornflour, egg yolks, or beurre manié (a kneaded butter flour mixture), or reducing liquid down and adding cream/or butter at the end.

Then there’s roux. A mixture of fat and flour that not only thickens sauces, soups, casseroles, meat pie filling, and gravy, it boosts the flavour. And the darker the roux the deeper the flavour!

So you may be worried because we’re making a light sauce it will lack in flavour. Not to worry, there is plenty of room to add extra flavour along the way. Unlike the classic French method, I infuse my béchamel milk before adding it to the roux.

The other key to a beautiful béchamel is the temperature. Gluggy lumpy sauces are not becoming. A fabulous sauce is flavourful, smooth and glossy. The trick is to make sure your roux is room temp and your infused milk slightly warm. If you add hot milk into a hot roux, not only do you have a high chance of burning yourself with steam, your result may be lumpy.

Cook together over medium-low heat for a few minutes whisking constantly until sandy in texture. Remove from heat to cool. If you’re using cornflour the mixture won’t get to a sandy texture, instead it will look more like a runny paste.

If you want the science behind it – the heat and whisking allows the starch molecules to expand binding to the fat. The longer you heat a roux, for example a brown roux, the more the starch will break down so you’ll actually need more roux to thicken whatever you’re thickening!

The next step is to add warm milk, while whisking, to your room temperature roux over a medium-low heat to make your béchamel. Simmer until desired consistency et voila! You have a white sauce!

From there you are only limited by your imagination and for me I quite like my cheesy sauce. So much better than the packet stuff too! Add a cup or more of your favourite cheese to your béchamel and try two of my secret ingredients – a little Worcestershire sauce (my mother’s trick) and a few drops of hot sauce (cause I like to heat things up!). 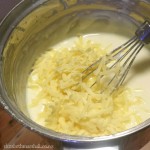 Heat milk on medium-low heat to infuse whatever ingredients you choose. Do not boil!!! A classic combo is onion, bay leaf, a few cloves, dash of grated nutmeg and a pinch of cayenne. Once infused and flavoured to your liking, remove from heat and strain.

Melt butter with flour in a different pot over medium-low heat for a few minutes whisking constantly until sandy in texture. If you’re using cornflour the mixture won’t get to a sandy texture, instead it will look more like a runny paste. Remove from heat to cool.

Once cool gradually add warm milk while whisking and return to a low heat. Whisk until smooth and then simmer to desired consistency.

Let’s not lose what we gained over lock-down… well, maybe the extra lock-down love handles! 🤣

As we all head back into the outside world, at different rates, I want to help to nourish your body, mind and puku.

Mental and physical health is really important to me... and what we eat and how we eat it has an affect on both! If I can help even a handful of people by sharing what I've learned along the way, I'd be so thankful.

Nourishment is more than what we put in our stomachs. It's everything we feed ourselves. It’s our self-care practises, what we use on our skin, how we talk to ourselves, what we watch, read, even who we engage with. It’s what activities we take part in and how we move our bodies. It’s even what we use to clean our living spaces and our dishes!

Let’s keep getting outside.

Let’s keep looking after each other.

Let’s keep taking time out for ourselves.

Or if you haven't been able to do some or any of those things... what better time to start than now. 💗

You’ll be seeing a few changes around here… I really hope you like them! Thought I'd start by sharing photos from the last 9 weeks of "staying safe at home".

If you want to nourish yourself inside and out, or you already do and want more, please stick around. Food, cooking, baking, and recipes will still be a highlight but I'll be including some other nourishing tidbits, science, psychology, and fun stuff too.

I’m cooking up delicious recipes to live a healthy life to the fullest…body, mind and puku.

Thank you for being here. What a journey it's been. Sending love to you all. xx E

PS - A few mentions so you know I haven't forgotten! 😘
> Katrin wants a garlic and onion tutorial.
> Anne B. wants some more fb lives!
> A few of you want some nutritious breakfast ideas.
> And Jo C., I’m working on a way to get my cooking classes back up and running in a safe way for you and your friends. ... See MoreSee Less

Share on FacebookShare on TwitterShare on Linked InShare by Email

This error message is only visible to WordPress admins


Error: API requests are being delayed. New posts will not be retrieved.

Error: API requests are being delayed for this account. New posts will not be retrieved.

Make sure this account has posts available on instagram.com.